What’s the speed limit for your guardian angels? 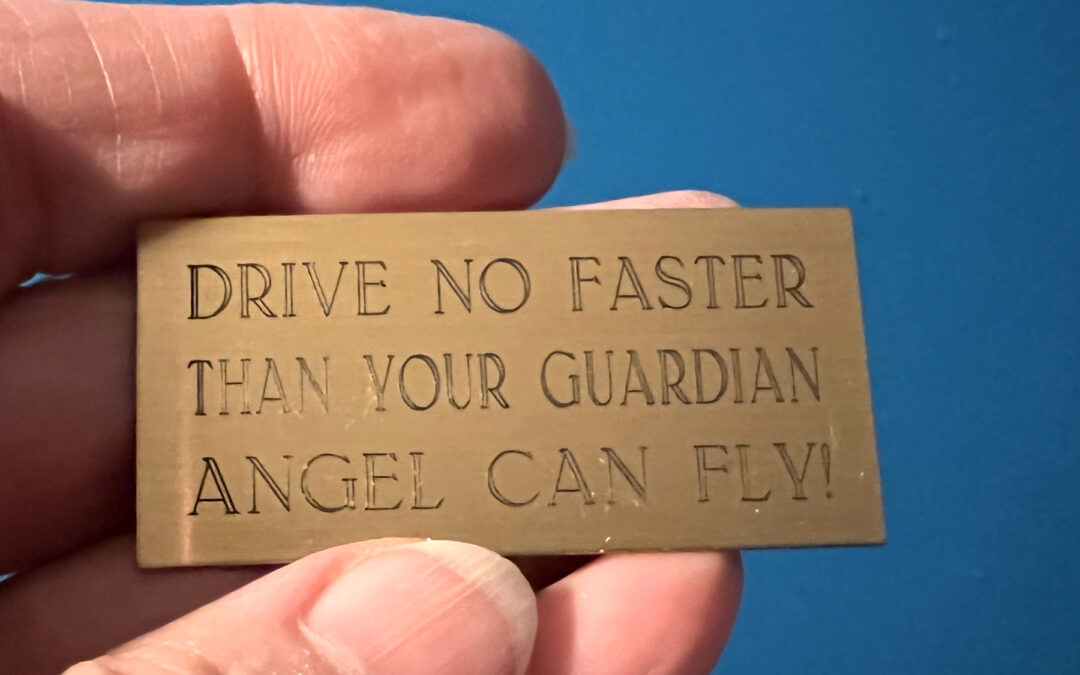 Several dear friends have given me a gift saying, “Drive no faster than your guardian angel can fly.” With the gazillion miles I drive, I’ve always heeded that advice … hearing the flapping of winged protectors many times.

Moments when God called in extras … Like in college when I didn’t tell my parents I had visited Roger two hours away at Rose Hulman in Terre Haute, Indiana. Duh, young love. Sure enough, that’s when I got in trouble.

Driving back to Evansville, the roads had some slick spots and the fog suddenly thickened as there was considerable truck traffic on highway 41 between the two cities. With blinkers on to be visible, I crossed a bridge where my brown Chevy Vega hit a patch of ice and spun in a complete circle, facing south again.

Catching my breath, I started forward, wondering how I had avoided the guard rails and going off the bridge. Thanking God, I —

BAM! Rear-ended by a truck that had slowed in the fog. Shit … I was fine. We exchanged information, and my damage wasn’t horrible. Back at the dorm, I called my folks in tears, sharing the news and how I should have told them I was going. Never again ….

And that time at the stop sign a block from home. My son with me, a car came at us and I had nowhere to go. I did the mother protective move with my right arm. BAM! He was fine. Me, whiplash, still requiring special pillows 30+ years …

And the time in Indiana I was on crutches after a bad ankle sprain. Roger and I had dropped our son off with his grandparents for a week and headed home. At a stoplight, Roger yelled “hold on!” BAM! Slammed from behind.

My glasses flew, as did my breath. Without that golden seat belt, I would’ve punched the windshield. Sirens. Okay but hospital-bound to be sure. I laid with that neck brace, tears flowing from the pain of the collar, putting pressure on the back of my neck injured previously. Someone mercifully loosened it and I only wanted to sleep as I waited to be examined …

And this week. Driving home after hours of interviews and research, I entered a familiar one-way street and saw backup lights on the left. They were stopped so I slowly continued. That car suddenly accelerated. I swerved and sped up to avoid it.

BAM! The back driver’s side. I’m okay. She’s okay. A witness told me I did some pretty good defensive driving. She called her dad who showed up shortly. We exchanged information, etc., and simply talked.

She cried. I saw myself, and I could not help but ask, “Can I give you a hug to let you know everything will be okay?” With her and her dad’s approval, I did and felt her body relax. A lot of soul healing in that moment, especially for me …

Looking around at the army of guardian angels hiding behind nearby trees, vehicles and buildings, I thanked all of them but had one important question:

← Leaders need a kick in the ass with lessons on being human Be honest: who and what do you pray for? →

Be honest: who and what do you pray for?
It's safe to scatter some memories to the wind

Relationships must be recycled with purpose