Two years after 9-11: standing amidst a city of souls 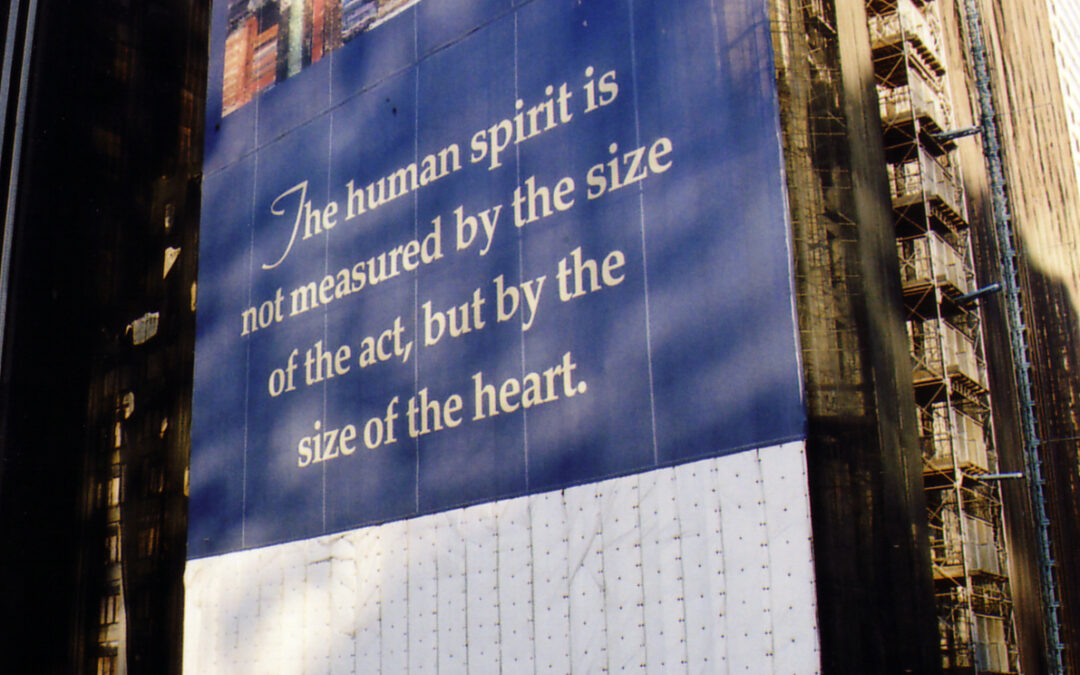 As I read my mom’s journals, I came to September 11, 2017, the day she designated as her own “9-11” … after a diagnosis of lung cancer. Then I remembered hearing that from other people facing a variety of difficult challenges on that specific day of any year …

For several generations alive on September 11, 2001, that abbreviated “9-11” or “9-1-1” took on greater meaning than just the number you call in an emergency. It symbolized the date that lives ended and lives were upended by a world we didn’t understand.

And in many ways, I think we understand that world even less today.

The oft-asked “Where were you?” comes up for us “old-timers” who witnessed history in the making. I was asleep, having gotten up much earlier to let the guy in who was remodeling our upstairs. He’s doing his thing and I’m trying to get more zzzzz’s when the phone rings.

It was my husband Roger, not at work 10 minutes away, but in England where he neared the end of another month-long assignment being an electronics geek. He asks if I’m watching TV. No. We’re being attacked. I wake up. I love you. I love you. We hang up.

Mesmerized by the scenes unfolding shortly after 8 a.m. Central time, I run upstairs to wake our 19-year-old son, explaining that I don’t know exactly what is happening but our country has been attacked. I’m silently petrified for the two men in my life … when will Roger be able to come home … and will my son have to go to war …

We survived in a period of unimaginable horror visually and verbally. The reporter in me swallowed every piece of news and the endless stories of grief, sacrifice, patriotism, love and heroism … always wondering what would happen next … to my country, to my world, to me …

I had no idea where life would lead me in the remainder of the decade. Though expecting I would continue to be a homebody, I discovered I wasn’t afraid to leave the safety of my home. Maybe it was a desire to explore the world before it imploded anymore.

Before even grander adventures would widen my vision, I found myself in downtown New York City on business on Halloween in 2003. After completing an interview, I drove to a destination deeper into the city that afternoon. It was only then that I wondered where I was in relationship to Ground Zero. Focusing on the crazy native drivers buzzing around me, I knew I couldn’t consult the map at this point. It had to wait.

However, I cannot explain what filled me in an instant. Overwhelming emotions and sensations and a sudden discomfort in breathing. I glanced to my left and saw it … a black curtain …

The seemingly endless black blocked off the former Twin Towers site… the massive hole in the ground.

I had suddenly entered the sanctuary of so many souls … those who had passed and those who mourned them and the collective loss of our nation and the world. It was a swirl of intense energy … and I had … to … catch … my … breath …

I’d complete my assignment blocks ahead and I must come back.

I must have been insane or I like to think, protected by those souls, as I walked alone the streets of New York City later that afternoon, drawn to the scene that I had only seen on television, that I had only read about in graphic detail. I called my mom and said almost in a whisper, “I’m here at Ground Zero.” What’s it like, she asked as I prepared to take photos.

But I know I was processing so much more … like I’m standing amidst a city of souls … encouraging me to feel at the deepest human level possible … challenging me to ask questions and seek answers to not only what happened here but to better understand life’s purpose and potential … starting with my own.

I came away from the streets of New York on 9-11-03 a braver soul. The following year, I’d go to Europe by myself … to Israel in 2007 as one of two gentiles with a group of 25 Jews … and driving solo all over the United States a few years after that and continue to do.

I like to think those souls told me to live richly, deeply and fully … And this 20th anniversary reminds me to recommit myself to their message …

What are they telling you?

Your choice: Either step into or out of a family

The child, the man, the boy at heart

When everything on the walls comes crashing down